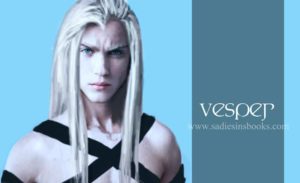 Vesper lives his life as sacrifice to a demon in order to protect his family and the Malice bloodline. His mother is queen to the Celestial Clan, who has cast her and her family aside because of the demon’s presence. Vesper spends his days in isolation, possessing extreme powers he doesn’t feel safe using for fear of upsetting Heiden, his soon to be master. When called to the Hierarchy, Vesper hopes he will have an opportunity to contribute some good for his short time on the planet. Instead, he meets Evanel, which sets off a chain of events he has no control over but he is certain he is fully to blame for.

Vesper learns he is god touched by the shining faced god. In a last ditch rebellion, Vesper chooses to protect the ones he loves before he willfully takes his own life. If he doesn’t die, he knows the madness will surely consume him on his awakening, and he will become an instrument of absolute destruction.