Just a quick heads up cuz I totally forgot to mention it in the last newsletter. Taken By Beasts is on sale for $0.99 for the rest of the week for Halloween. (Okay, I might have just forgotten I set up the sale until now… >_> Whoopsie.) 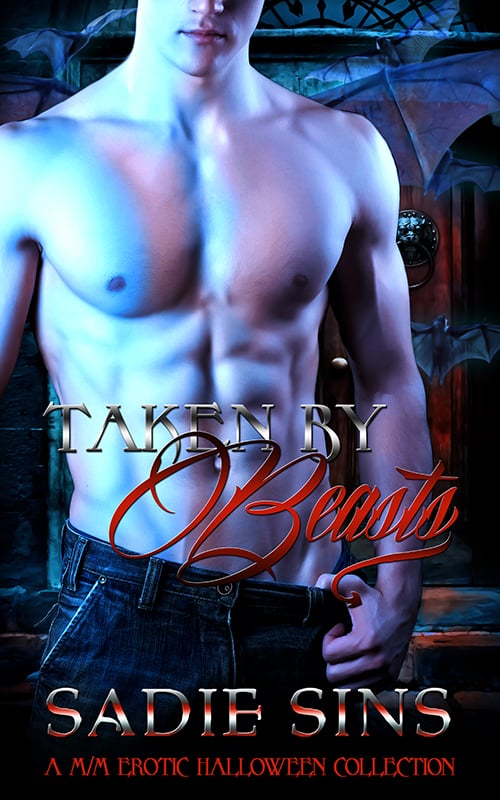 Halloween has never been quite so naughty as when you’re Taken by Beasts.

Hey, did you remember to snag the edited version of Step Daddy last time? It’s free!

I wanted to check in, explain a bit of what’s going on with me as we approach my ultimate favorite time of year, Halloween.

My broken tooth sucks but the infection seems to be done (for now.) I’m hoping to get it pulled soon—contacted a dentist who takes my insurance and also practices sedation dentistry. Apparently, it’s really common for anyone previously abused to find going to the dentist triggering. Something to do with being tilted back in a chair, feeling suffocated, things stuck in your mouth, usually a condescending person talking down to you about your brushing/eating habits, etc. It’s been extremely difficult to get me to a dentist, and at this point in my life, unless I can find one who isn’t a complete sociopathic sadist, I’m just walking. I have no interest in re-traumatizing myself because ‘reasons.’ But I have shitty dental insurance, so it’s been hard to find someone who actually gives a fuck.

When you can’t sit still…

So… I think I have ADD. Things have changed really drastically these last few months—it’s like I’m waking up again, living in my life, finally being me (fuck, how many times have I said this? Here’s to it finally sticking!) I started experimenting with small bits of caffeine just last week and saw such amazing results. I also saw my adrenals struggle and went back on adrenal support, and suddenly here I am, waking up every morning (instead of at 5pm,) cleaning the house, getting errands done, cooking new meals and eating regularly, singing to music and speeding around in the car, really enjoying life because I can feel joy again… and kinda running from life because I’m struggling to sit still and focus.

I know my dopamine system has been fucked. The moment I realized those Parkinson’s symptoms last year right before the mold took over my room, I have been super focused on reversing back to ‘normal.’ And for the most part, I’ve gotten there. I finally got my creative spark back this week—it’s fucking awesome! But wrangling my brain into focus is so freaking difficult. O_o It’s not a new pattern. I’ve seen this again and again, how my brain likes to problem solve, how it liked to battle at every step because a part of it was wired to get dopamine that way. I’m not a creative because I’m good at this shit; I got good at creative stuff because that’s how my brain is wired to get what it needs to thrive. Problem solving is my dopamine goldmine. If it wasn’t, I wouldn’t have been able to solve my health problems because I wouldn’t have been driven. If I could only get dopamine through exercise, I would be an athlete. The same with social interaction: if talking to people was the only way I could get my dopamine burst, I would be social AF. But that’s not how my brain is wired; this squishy, organic computer is all about the problem solving.

So, I’m still getting dopamine from making art, the eye test from hell of decision fatigue of ‘this’ or ‘this’ that rewards my brain with dopamine every time it sees a pattern or color it finds pleasing. I get dopamine from expressing a thought into words, like with this Newsletter, or when I write argumentative pieces. If I decided to write nonfiction, that would be a win. What I’m struggling with to even sit still for long enough, never mind get a dopamine reward from is my fantasy writing. Like, my house is clean and my laundry done and folded away and I’m cooking new stuff and raking leaves because I can’t sit still. I just want to jump up and run around and DO STUFF. And I was hoping it was, you know, a phase as my body gets healthy and I’m compelled to live life more fully. But really, I am struggling to slow down and just be still long enough to complete writing tasks.

I’m brainstorming and researching now about what I can do. Maybe timed writing bursts followed by quick exercise or a bit of chocolate or something. I want to help wire my brain to find reward in writing. If you remember anything about the Pavlov experiment, he got dogs to salivate from the sound of a bell by first associating that sound of the bell with food. I need to create a positive dopamine response to go hand in hand with writing again. Someone had a good idea of creating a visual representation of my process so that I can see my accomplishment as I finish scene to scene, and therefore derive some satisfaction that way, seeing the visual pattern of success. It’s a lot harder with writing because it’s not immediate reward the same way you get from getting a scent burst or flavor burst or visual burst. The senses just aren’t engaged the same way; it’s purely this conceptual thing happening. Problem solving is very much hitting a wall and gaining dopamine from pain, just as much as gaining dopamine from the reward of solving the problem. It’s what drives me to experiment—failure is a win just as much as success to my dopamine system. I’m not getting any of that from writing.

Do any of you struggle with ADD/ADHD? I’ve been looking up tips online (like, one recommended a weird, giant bouncy ball to sit on so I can move around while typing—not sure how the cats will react to that… >_> ) I’d love to know if anyone has some real world tips that have helped them. Looking back, I think this was part of why I couldn’t read fiction anymore. My brain just stopped getting rewarded from reading a new story, but I could still enjoy television because of the visual/auditory stimulation. I’m determined to get this part of me back, I just feel like I’m wandering around in the dark right now as I sort it all out.

On the creative front… Sexing it up!

Now that I rediscovered my fun and creativity in regard to writing—yeah, that came back this month, fuck yeah! (I am improving, as frustrating as this all is. I’m winning this shit.) I decided that the new PATB format really required some adult content in the first episodes to ensure new readers aren’t confused. Sadie Sins can’t put out 3 sexless books—that would be madness. @[email protected] So I’m pushing the background characters a bit, letting them shine—because I refuse to ruin the damn build up of actual romance I have finally created for Wylie/Dorian.

The inner beasts of the characters now have voices. Not too complex—they’re kinda the primal thoughts jumping to the surface depending on the situation, usually in contrast to how a character wants to act. Theo’s inner dragon is a bit of a bloody fuck monster in all the fun ways. <3 Lol, Theodore might be going on a sexy killing spree or two to spice things up (no one ever said authors or their pet dragon shifters were sane, peeps. XD) I also thought it might be fun to really see how magic can work against paranormals, how they can be tracked down, spells sprung, that sort of thing. Magic was more a device in the first version of Demon Arms, not necessarily the element in a world it should be that changes how everything works. I want to see magic be its own character, changing the playing field, changing the power dynamics like it should.

So yeah, I’ve got some fun, sexy, bloody bits to add to the story as I go forward. And it’s helping. When I get creative elements sparking, outlining new pieces in, that dopamine reward turns on and I’m pulled back to the project— I am going to win this, babes. Out of all the shit I have overcome health wise, this has got to be a breeze. I turned back on my fucking emotions and sensations when they stopped half a year ago; I can turn back on the dopamine reward for writing. How do I know? Because this is how my brain fucking works and I have faith in my very nature to follow through and beat this shit.

Hope you’re all enjoying the weather and change of seasons (unless you’re in a part of the world that is far more consistent.) The leaves are a wildfire of beauty outside, which of course is where I’m going right after I mail this out. I love autumn and the energy sparking in the air. <3 It’s inspiration for all the creative thoughts flowing in my mind.