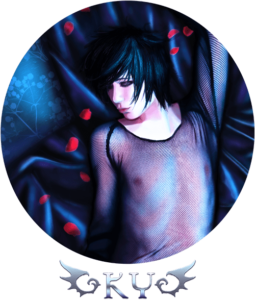 In the third saga of the series, Coven Saga, it’s revealed Ky is part relic, which is why he has unique abilities to communicate and connect with the demons other sorcerers lack. This is not a natural melding but one created by the manipulation of genetics for reasons that are unknown with the death of Anselm, Ky’s grandfather. That Ky exists at all is an anomaly, an impossibility where all other attempts to create a relic hybrid have failed. His unique genetics leave him susceptible to being bonded to sorcerers and his will stolen away, while his powers that are waking are impossible to predict or fully control with him being half human.

It is learned Ky’s genetics were melded with Magnificent Night’s, giving him powers similar to a requiem, who are feeders back on Realm. Requiem are cherished for their ability to raise up energy when needed to feed other relics, and for their strength in taking on the deranged overseers who terrorize the weak. Ky struggles with the knowledge that he has powers that give him control over relics without even trying, and that the men he loves most might only care for him because of this innate ability. Ky’s newest ability to feel hunger the same way as an energy consuming relic makes itself known with his genetics waking. Surrounded by the Aeternum, ruthless sorcerers looking to find any weakness so they can steal Ky’s demons away, this very relic flaw could lead to terrible consequences if not controlled.