So, I think I might be moving toward the visual novel idea. I was thinking recently about all the reasons why I couldn’t move on it before. For one, I was looking at an Amazon focused strategy which required me to get all these books published first. Now that I’m in a website content strategy, that problem is alleviated completely, and I just need to get used to the idea. Like, it’s hard to keep remembering the freedom I have to create more than just the rewrite of PATB. I have options now that I don’t need to make content that’s only Amazon friendly.

Another big reason was time/money when it comes to graphics creation. To be blunt, although I used to make art a lot when I was younger, I don’t necessarily enjoy it much anymore. Digital art is time consuming, and usually life consuming for me, and the Demon Virus visual novel has a lot of characters that I would have to have model art for. It’s a lot of art–I’m talking about 10 main characters because of the branching plots, and they would each require different expressions, poses and outfits depending on storyline. Aka, hiring that shit out is $$$ I just don’t have. 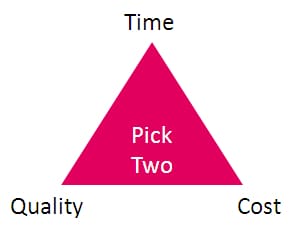 I don’t know if you’re familiar with this little graphic, but it rules the majority of my creative life. As someone who was ill for so long (and, let’s be frank, broke,) I utilized the resources I had to create a quality product, and that involved taking a lot of time and refining and learning to get to the best level I could be with, well, pretty much everything I strive at. I don’t want to be ‘good’ at something; I always want to be my personal best. Not the best ever, but the best of my ability. So it’s usually time extensive. With a few drawing shortcuts, though, I’ve found some ways to make this process much faster than I feared it might be. I just tried it out with the Blowjob King character art, just to see if I could get a feel for it, and I’m happy with the results.

I’m basically creating my own reference in a 3D software and then using it for the body base of the 2D characters. It still requires creating line art, clothing choices, color, etc, but this takes a lot of pain out of the process. Having character bases that allow me to reference the exact height and body build which I can then pose accordingly takes a huge chunk of time out of the sketch process, and if you’re an artist, you likely know that unless you get the fundamentals correct in you sketch, you’re end product is doomed, like forgetting the foundation to a house.

I wish I could have done this with a more elaborate software that could do clothing, hair styles, etc, but I wasn’t able to find one that posed as well or naturally (or was affordable) as DesignDoll. I tried Daz studios last summer–It was frustrating, to put it kindly, and the characters were very stiff reference with a lack of intuitiveness for changing their body types, etc. Seriously, if I had the cash (I can only imagine this shit is super expensive) I would love to just create a character, pose it, and use it directly in the interactive novel. Like your own damn anime. I feel like this shit must exist at this point, but yeah, also assume it requires knowledge and cash way beyond me. But hey, I can find my shortcuts at least, and it makes a difference.

The last problem was, naturally, learning a new software to create a visual novel, but I think this is pretty much solved too. Last summer, before the mold drove me out of the house and I lost months, I had been playing with a visual novel builder that had been really intuitive. I have to go through my old notes and find the damn name of it again, but I remember it was basically a drag and drop editor set up–it was like an html editor in a lot of ways where I just had to provide the content and it could set up really quickly.

I’m still hesitating. I would really like to have the first PATB books published before I take on this project full steam, but I’m not sure if it’s ‘realistic.’ PATB, at this point, isn’t about new content, but about fixing up the old content so it’s publish ready, and I’m worried that’s going to be perceived as basically standing still. I don’t want to jump into Sorcerer Slayer until the other 2 books are finished–lets not add anything else future wise when I need to ensure the timeline is set in the past, you know?

I’m not pushing myself enough. I’m not talking stress; I’m talking challenges. I’m bored by the rewrites and my productivity is going down because of it. So I think as a creator, I have an obligation to figure out how to get out of this funk and get motivated. I’ve been trying with the rewrites, every day looking for new ways to make it interesting, push me to get to a remotely useful wordcount, but I think I’m just honestly too bored. I need a challenge that I can do side by side with the rewrites, one that’s paced at my choice so it doesn’t become a stressors. That first challenge is just to get back into writing anything other than PATB, which is why I’m writing up Blowjob King, but I think after that I’ll be looking at the visual novel idea as the next project.