Okay, so cool stuff this week! For one, Wendy has released her Foundling Trilogy. And might I say, the covers are absolutely spectacular. *preen* 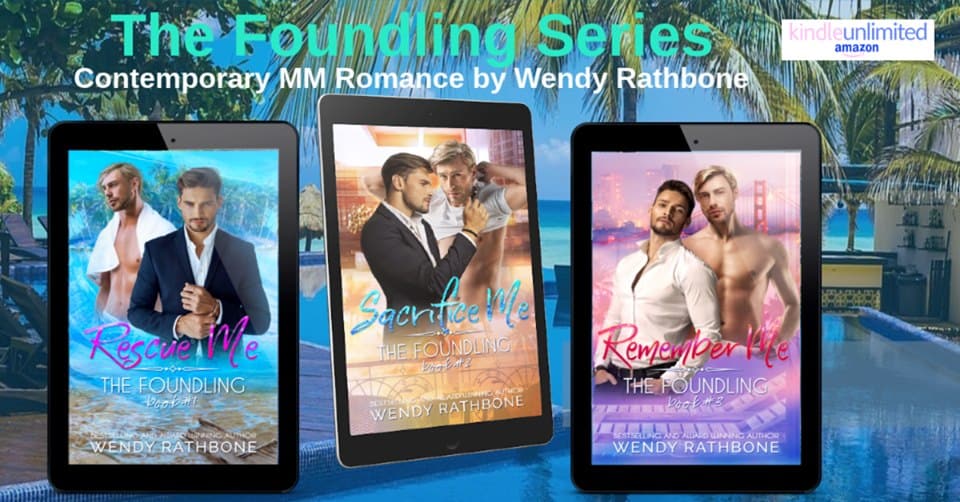 Wendy talks about the creation of this trilogy, and in it, a bit of her process as an mm author. She jumped into the genre writing field after coming from a literary background, and part of the beauty of the Foundling Trilogy is watching her find her voice when she shares these characters with the world, book by book. On her Facebook page, you can find more interesting tidbits from her behind the scene world as a writer, as well as on her group page, Wendyland.

I come from a background of many different writing experiences including non-fiction, poetry and fantasy short stories. I wrote a ton of slash fanfic and was always hungry for more male/male (in the past we spelled it out and put the slash between the ‘m’s). The mm romance genre was young and new, and I had not heard of it yet.

At that time, I also had a wonderful obsession with Anais Nin, who wrote beautiful and poetic erotica back in the 1930s and ‘40s for a mysterious benefactor who paid her and her friends a dollar a page for sex stories, and she had two volumes of erotica published, as well as very sexually explicit diaries of her life and her sexual exploits juggling a husband and multiple lovers. I couldn’t stop reading her lush prose, her amazing insights, her deep thoughts about her explicit sexual encounters. But she comes from another time, thus she writes phrases like: “He stormed and sought to conquer.” “He made of their room a den covered in rugs and tapestries, perfumed.” “A long member came out from the middle of one man and penetrated another from behind.” She even eroticized rape. And yes, these books are sold on Amazon despite taboos in them because they are considered “literary.”

I was in a dreamy swoon over it all.

I deliberately chose to write a hard-hearted character, someone who is the last person you might expect to tell a story from a swoon-worthy point of view, but he can’t help it. A man has entered Diego’s edgy life and he is instantly challenged by his dramatic feelings and transformed.

This was an experiment. It was supposed to be a one-off. I had zero plans for three books. I’m a pantser, so I didn’t even know there would be more story to come after the first erotically poetic short novel.

I put the story on Amazon under gay erotica. I called it a hot gay love story. I did not understand the language or terminology that existed then for mm romance.

When I wrote book 2, the plot just came to me. It was a year later and I decided to use a more straight-forward third person writing style. Yes, it’s still lush, and it’s hot, but I was less Anais-influenced and more wanting to write in a fever about these characters. I saw mm romance then. I was still exploring it as a genre, still new, but I was happy to find it as a reality! So with the second book I deliberately made it more relate-able.

Two years later, book 3 came to me out of nowhere. I am a pantser which means I use zero outlines and very few notes, if any. I just hear a character and go with them.

I was writing another novel at the time, but suddenly Alec started talking in my head. Dictating his story. He was shy and afraid at first. He wouldn’t let me know much at all about him, so I let him babble. He’s emotionally unstable, a bit messed up (for good reason!) That book is first person, and because Alec is himself in a dream-state a lot of the time due to amnesia and nightmares of his past ordeal at the hands of sex traffickers, I let him go on. The first parts of that books show his mind-state. It’s a dreamland a lot of the time. He’s not right in the head. But the second part is intense angst and very straight-forward as he finally confesses, and finally remembers himself. It is, I think, the strongest of all the books, and makes me cry every time I re-read it.

What a ride this was! All of it was an experiment. I didn’t consciously do formula romance. I focused hard on setting-as-character and how it affects emotion. And I focused on character-driven 100%.

On the re-release of these books of my heart, I updated everything I could, editing, proofing, tech, covers. It’s been almost a year in the works to re-do and re-brand these books.

I write this history because I want people to know how these books came to be and how and why they differ in style from each other and from my more recent books. My journey has been my own, unique and wonderful, writing from a state of pure love.

The mm romance genre continues to be a hard place to actually experiment in and win favors, but I love it so much! I read it all. The bestsellers, formula, and especially seek out the unique and on the edge authors who unabashedly blaze new paths into kink, dark and taboo. And some of the more poetic authors… I sink into your books!

I think it’s all wonderful and I thank you all every day for letting me be a part of it!”

I gotta say, I do love when authors share their process. It’s like getting a little window into their minds. These three books are an amazing exploration of love and lust in the settings of a dark, humid jungle to the streets of San Francisco. The characters unfold, resistant in their defenses and deeply felt pain, to both each other and the reader. The journey is a glimpse into the soul in all the right ways. 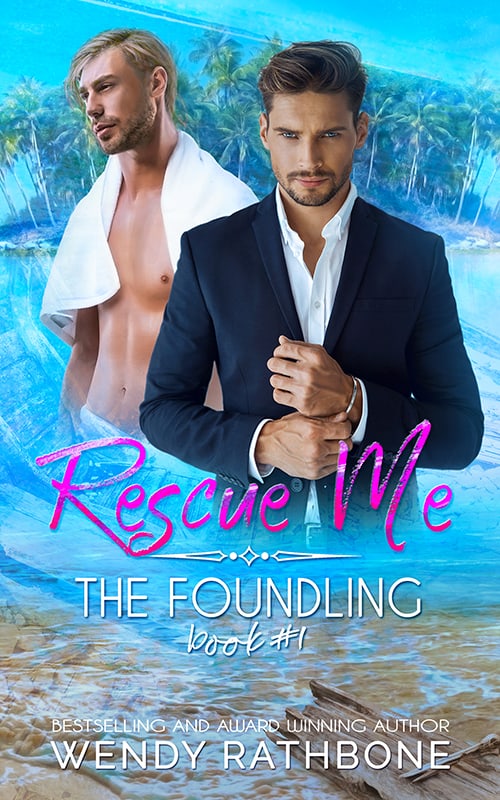 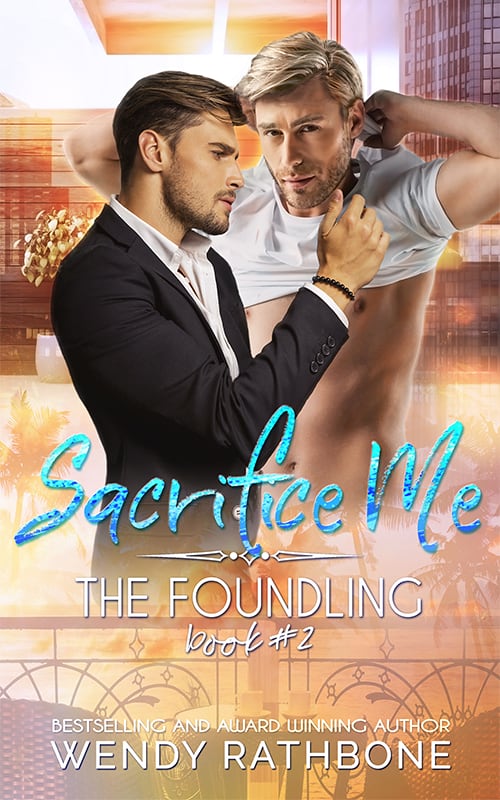 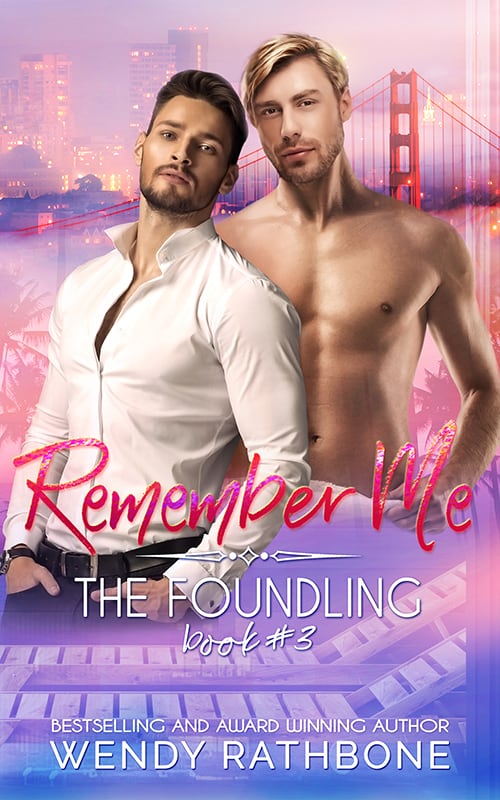 I was really excited to be invited to take on the Foundling Trilogy cover project and give them a contemporary makeover. Working with stock photos to ensure that the covers all look related can be damn difficult, especially when sifting through models and trying to get the right look and feel (and face! @[email protected]) But there was something about this project that just clicked, and I felt like I grew a lot as a cover artist as a result.

I used color pallets I’ve avoided before this project, especially yellow. (Yellow has been such a challenge for me. I found interesting research that it could be linked to the Parkinson’s and how the brain perceives tone and color, which might be used to diagnose the illness.) I truly feel the second cover with the yellow/purple color theme pops—They all do, really. (Do I get to say that? Like, is that just narcissistic as fuck?) There was just something about that touch of cherry red on the bridge of the third cover that I fell in love with. Anyway, I’m super happy with the results. I got to give readers a peek into each book, hopefully appealing enough for them to want to crack the story open and give it a read.

I started the visual novel project! 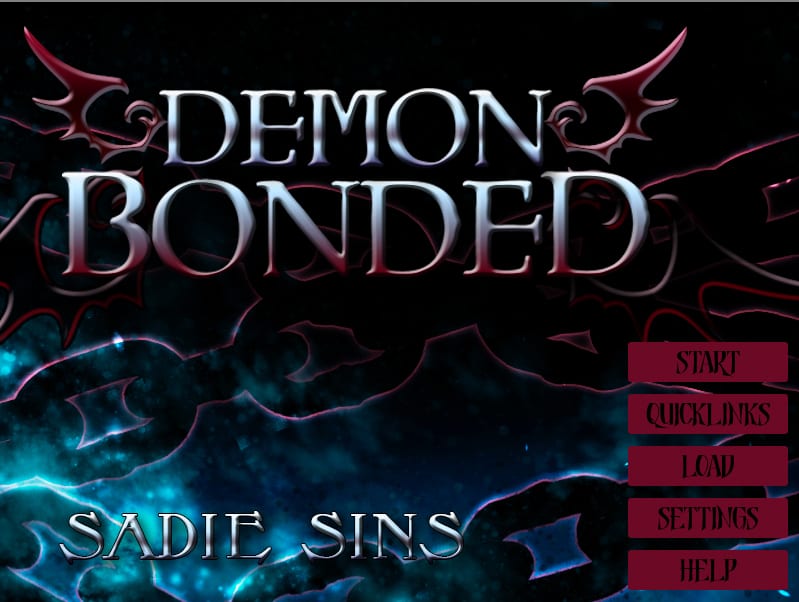 I started the Demon Virus one too, but it’s only for members. Everything Demon Bonded is free—cuz fuck yeah, Demon Bonded! I think it’ll be interesting to watch these games grow.

So it’s all preliminary stuff at the moment as I try to understand the game engine and how to get my vision to manifest. But it’s been so much fun! (Frustrating too, let’s be real XD) but I’m really enjoying this approach to telling a story and engaging readers in a new way. I only have placeholder images. I need to take some time to sculpt the characters and actually learn the texturing in Blender so I can get some color on them. I want to do the background scenes and everything with 3D modeling—it may seem like a lot of initial work, but everything I make can be reused.

It’s why I’m making two games at once “Demon Bonded” and “Demon Virus.” Both are long games that will require reuse of the characters. If I’m going to put the effort in, it should be for strong story based stuff that can be revisited, chapters added with ease, art made with the character models to collect, etc.

These project has been a long way coming. Not just because of the illness. I’ve been struggling with adulting, if I’m honest.

It’s one of those things where I think if I do ‘the right thing,’ I’ll get good results. Instead, I just get bored, and frustrated, and fight myself like a kid having a tantrum. I know as a ‘proper’ writer, I should stay on focus, write what I’m ‘supposed’ to. It’s good business. But my creativity just doesn’t work like that. Which I fucking knew when starting, yeah? Once I hit the 10,000 word mark, I want to write a new story. All the time. But I’ve been fighting that and I think it’s been stifling my creativity a lot.

When I resist my impulse to play (which writing used to be for me,) writing becomes this horrible, mean job where I can’t find my happiness. Working on these visual novels has been a lot of play for me after a really long time of telling myself I have to work instead.

I don’t know if it’s my neurotic brain, something to do with the low dopamine, or what, but I get stuck in these really dumb ideas of ‘supposed to.’ I mean, really dumb. I know they’re dumb every time I stop and question it, but there I am, stuck anyways. I start judging myself, telling myself real writers work like machines and write what they’re supposed to, not what they love or are inspired by in the moment. I start thinking people are judging me, angry I haven’t finished other projects (and fuck, I get PMs along those lines, lets be real.) It’s hard to remember I’m a human being, not a human doing, and I have limitations.

I can’t be a machine; I don’t want to be a machine. I want to have fun. I started writing to have fun and it’s really important I figure out how to keep that fun in my life.

I think these visual novels are going to add to that fun and help break up the monotony of ‘supposed to’ I’ve trapped myself in. I enjoy learning— when I learn something new, I am having the most fun. So I need to make sure I’m learning while I’m also writing novels and series and such. I need to start adding that into my priority list of being human.

I hope you’re all having a marvelous weekend and enjoying the weather! I keep waking up when the sun is about to disappear, but even so, I may have tanned a bit. XD Not quite as pale and ghostly as before. Good stuff. 😉