So, some cool shit. You can read the first 2 scenes of Demon Bonded: Episode #12 up on the free part of the website. That page will be updated every time more of the story is, so feel free to check in whenever.

Wendy has a new book out, just released, that’s looking damn cool. It’s in KU for all you peeps who enjoy that program during these tough times. Check it. 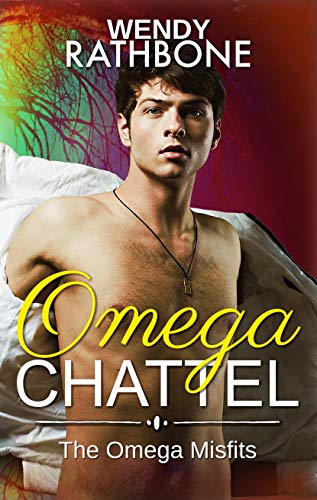 At Zilly’s Chattel Farm, Alli is seen as an upstart Omega. But in reality, he is the victim of a brutal house-dad who wants to control him. Threatened with being institutionalized when he turns eighteen, Alli runs away.

Tarin is an Alpha who runs a small school from his own home for wayward Omegas. Three or four students at a time are all he can handle and his home is full. But when he meets Alli on the streets, he is compelled to bring him home.

Alli wants a better future for himself, better than selling himself on the streets, so he agrees to be a student, when what he really wants is Tarin himself. Tarin doesn’t sleep with his Omega students, and the one exception he made broke his heart.

But Alli is persistent. And not only does Tarin have a weakness for broken young men, there seems to be a spontaneous bond forming between them. The combination is turning hotter faster than they can keep up.

I’m starting up writing again, and gonna be real, it’s a bit like wrestling my brain to focus… through barbed wire… while on fire. >_> While jumping back into Demon Bonded, which has been ignored far too fucking long, I came up with a super cute story focused on the apprentices. It’ll be a little mini side story… er, spin off? from the Demon Bonded world.

See, I had this really fun Liem story where he finally chooses a demon after being burned with his experience with Fido/Brave and that douchebag Tobias, but it was its own thing, you know? It felt more than a bonus story, more than just a little side thing, and it was going to be long enough to be multiple episodes—something I’ve never done with a bonus story. And, as we jump into the Aeternum, where Ky meets the apprentices of the time, I realized I really wanted to make a thief apprentice there to mad steal from the sorcerers of Blackstone Falls.

So, I thought, hey, why not just make it all its own thing where, well, Demon Bonded Apprentices are the focus. Liem can be his sadistic self as he tries to be a better person (while being a total asshole to the more dickish apprentices) and winning over a rather wild, violent relic who is very reluctant to trust anyone, and we could also have this super cute Cade sorcerer come in, playing dumb as he infiltrates the apprentice mentor program, while looking to get everything he can from the peeps running a demon slave trade out of the small town.

I don’t think it’ll be a super long story. Like, maybe five episodes tops… but it’s hard to say. You never know, sometimes characters do their own things and surprise you. Cade definitely has his eye on someone, and I’m pretty sure he’s going to steal him too by the time it’s all written. <3

Right now, I’m clinging to the creativity I’m feeling to help pull me through the damn misery of trying to organize my brain to write again. I was working on the interactive choose your own adventure, but realized it was only becoming this loop where I didn’t know how to move forward, so I decided I needed a more linear story to focus on for the moment. This mold thing is fucking hard—it’s like every time it hits, I have to remake my brain all over again to function the way I want. But fuck, it beats looking at the damn news and predicting a horrendous future, so yeah, gotta do the work. Gotta push through and just keep working at it until things flow again. I’m hoping I’ll be myself by the time I finish the Demon Bonded/Demon Bonded Apprentices episodes to jump right into the 3rd PATB episode.

Oh, shit, I finished setting up my office! It’s so weird to realize I haven’t done a newsletter in so long. @[email protected] Uh, I basically set up these dry erase note cards all over my office. One set is the completed outline of the next episode of PATB—yeah, I’m on that shit, just waiting for my brain to show up. (The energy needs some tweaking in the first part of the episode, just kinda dragging right now.) The other is focused on Demon Bonded, while I got an entire wall divided between fanfics, WIPs and audiobooks.

I realized this summer that not only did visuals help me comprehend what I had on my plate creatively, but it also made it more manageable. I’ve been doing a lot of things to find ways for anything but my brain to hold onto the info I’ve been juggling all this time in my head. With the way dopamine is lowered from allergy response, and the brain swelling and plain old neurological scrambling that comes along with mold exposure, having external constants where I can just reference my own notes about my books makes writing so much easier. Which I’m learning the hard way this week when writing Demon Bonded and realized I gotta stop and make an actual reference, otherwise this just isn’t going to happen. I already did this with PATB, which is why I was able to bang those two novels out—I had reference at my fingertips. But of course I forgot that was why until I failed to have that reference for Demon Bonded. @[email protected]

It feels like this annoying busy work keeping me from what I want to do, but at the same time, I know if I don’t create a reference, I’m not going to move forward. (fucking adulting for a scrambled brain.) I hate it—it is so boring taking notes of my own stories—but I seriously can’t remember enough to not do the work.

So, yeah, that’s me. My cleanroom bubble is working, and as long as I stay out of moldy buildings, I’m pretty much 100%. It’s just getting my brain to remember the neurological pathways to do the shit it’s good at. Started up bullet journaling again, too.

Honestly, I watched my dad go through dementia, and I had to follow after him, you know, just see the trail of consequences of having a brain that just doesn’t want to do what it needs to do when his kidneys started failing. I am doing everything I can to not default there. It’s not fun. It is always going to feel like work. And if it’s easier on my loved ones, then yeah, I will do the damn work every single time. It becomes a series of habits to keep your head straight after something like this. Ideally, those habits will become default. But if they don’t, they don’t, so it’s better now to build a life where those habits are normalized and set into focus to get the best chance you can at healing.

Hope you peeps are doing well. I could tell you a zillion horror stories of all my fears since the US Congress decided they didn’t have to protect and support the American people during covid 19 and they just took a fucking month long vaca while letting unemployment insurance drop when our numbers are at a world wide worst, but yeah, with my brain the way it is, I gotta focus on less upsetting things. (but if a revolution is happening anytime soon, count me in.)

Shit’s tough. I think I get by helping others the little that I can. There’s something about feeling part of a community during a time when you see every thing working to divide us that feels a positive rebellion of its own. A smile is a rebellion against the assholes of the world. I don’t know when it became ‘everyone for themselves’ in this country of mine, but it’s a pretty disgusting, sociopathic mentality that has no place in crisis—it has no place in the future of humanity. We’re all in this together, whether we like it or not, so better to show up and be good to each other. At least, that’s my motto of the moment. 😉

Hope you’re all safe, all healthy, all happy.